Home / Blog / Neurotransmitters: not like filling up a cup

In the wider community (and in medicine) I often see drugs that affect the brain be misunderstood.

A popular idea seems to be that our brain is a cup full of some amount of serotonin, when we are depressed it means we have less of it and that when we take an SSRI, we increase how much we have in our cup.

This is very simplistic but it's misleading. We might not understand everything about the brain yet, but we can certainly do a better job than this.

How does a synapse work?

Okay, what do these drugs specifically do? First let's see how a neuronal synapse works, the basic building block of our brains: 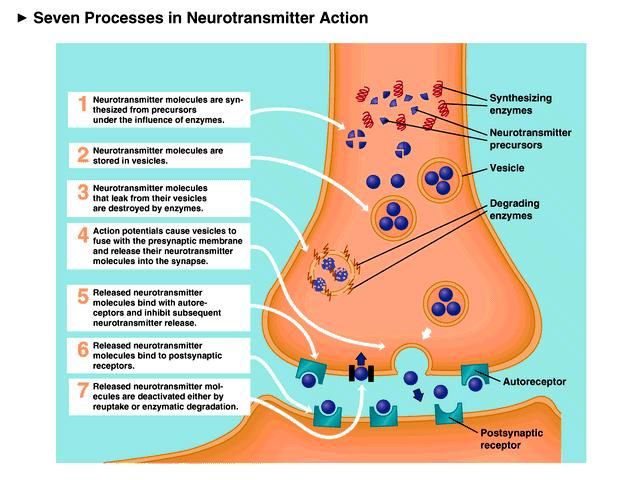 Let's take the example of methylphenidate (Ritalin), often used to treat ADHD. This is a dopamine reuptake inhibitor. When a dopamine signal comes in, it will linger for longer in the presence of Ritalin because the drug is blocking the removal of the neurotransmitter. This will then fire a stronger signal in the next neuron than what would be triggered otherwise. In other words, it will amplify any signal that uses dopamine.

What is attention? Broadbent proposed a "filter" model in 1958 - attention acts to filter out other information to prevent processing overload in our brains.

We know that reward is mediated by dopaminergic neurons in the nucleus accumbens in our basal ganglia, a small but important part of our brain. Many experiments have shown that a dopamine signal is created here when what we expect is different to what we have seen, a bit like an "error signal". The "error" is the fact that something unexpected happened. We then adjust our mental model and try again, and we get less of an "error" signal. (Exciting work by Wolfram Schultz and co!)

This is why we get less and less pleasure out of doing the same thing again and again, but at the beginning things seem exciting and new. We can become addicted to almost anything, as long as whatever we are doing produces a reward/"error signal" that hits escape velocity, and somehow bypasses the default tendancy for something to get less and less rewarding the more we do it. This could be through self-administering recreational drugs (interestingly, addiction doesn't tend to happen so much when "addictive" drugs are given in a healthcare setting by someone else, because it breaks this feedback loop), or even finding video games so fun that they just don't get boring.

This also seems key to maintaining our focus and attention on something. If we aren't getting a rewarding feedback, it's like getting told to study and that there's a test next week, vs being told to study but there's no test. A lot fewer people will have the motivation to study.

How does Ritalin affect attention-deficit?

So if we combine the two bits of information above, taking Ritalin will amplify any dopaminergic signal that our brains are producing already. It will specifically affect the bits of wiring in our brain that use this as a messenger, and make them shout louder when they have something to say.

It will not create any new dopamine, or any new signals, but if we assume someone with ADHD has a problem with attention, then they will get more of a reward out of doing something than they were before. This will hopefully get them to focus on things to the same degree as everyone else.

Extending this more nuanced view to other conditions

We can extend this view to other conditions, such as depression. Taking an SSRI won't turn up the amount of serotonin in your brain. Instead, by preventing their reuptake, it will amplify the signal specifically in the nerves that use it as a transmitter. Over time, it will mean the emotional signal that your brain uses to form memories (serotoninergic neurons project from the raphe nucleus to the hippocampus, which is important in memory formation) will be less negative.

When you record new memories (from your waking experiences or even through the process of remembering memories you already have, a process that actually destroys and rewrites them [but which is a whole topic for another day]), it's likely that process will integrate some of this more positive signal to colour your feelings of those memories (prosody). Eventually, over a period of months, you'll notice a gradual mood change because the memories you'll draw from will be more positive.

Overall, the brain is still very mysterious and we do not understand a lot of how it works. Drugs that affect the brain are blunt tools, but they are cleverer than just turning up and down the amounts of neurotransmitters everywhere in your brain. It's how they amplify specific types of signals inside certain circuits in your brain that can help us understand both why they work and ask questions to what's really going on inside our heads and make us who we are.

How does a synapse work?
What is attention?
How does Ritalin affect attention-deficit?
Extending this more nuanced view to other conditions
Conclusions
Newer
"Interview simulator for medicine" Back to list of articles
Older
"NHS Bursary: A Complete Guide for Medical Students"