(i.e. how to "pirate" your chemicals)

I work in a Hematology lab. Often in research we use kits to save time, but they can often be eye-wateringly expensive and difficult to debug.

Recently I had to measure the hemoglobin concentration in a large number of samples. These were very dilute, so sticking them in the normal blood analyzer machine did not work so well. I needed to do this manually.

Here's a story about how I managed to make a hemoglobin assay kit (normally $300!) for basically nothing. Hopefully things like this will speed up research and help us discover better life-saving treatments!

What I had available to me

Hemoglobin was one of the first blood parameters to be measured routinely. There are lots of ways to do it! In this case, I needed something fast and scalable (on a 96-well plate reader).

The classic is the cyanide-based Drabkin's solution that turns hemoglobin into a form that has a well-defined spectrum. However, this is not very stable over time, contains cyanide and not usually available in most labs.

In recent times, there have been many more methods at measuring hemoglobin, from using Sodium laurel sulphate (AKA Sodium dodecyl sulphate, SDS, which is common in Western blotting as a detergent) to HARBOE. There's actually a pretty good review on the topic here, but I will focus on one method that I found to be quick, cheap and effective.

The Kit I started with

The QuantiChrom Hemoglobin Assay kit (catalogue no.: DIHB-250 from BioAssay Systems) was the recommended kit to do this with. The manufacturer has recently become eco-friendly, which basically means they don't print out the instructions for you and put them in the box.

The kit actually comes with two small bottles. A 50ml bottle labelled "Reagent" and a 10ml bottle labelled "Calibrator". That's it. $309 please. Enough for 250 tests. This sounds like a lot, except everything needs to be done in duplicate on a plate reader, so it's really only 125 tests. Minus the calibrator and the water (not included) samples, it was only about enough for all of my samples (~100 of them) - from one experiment! 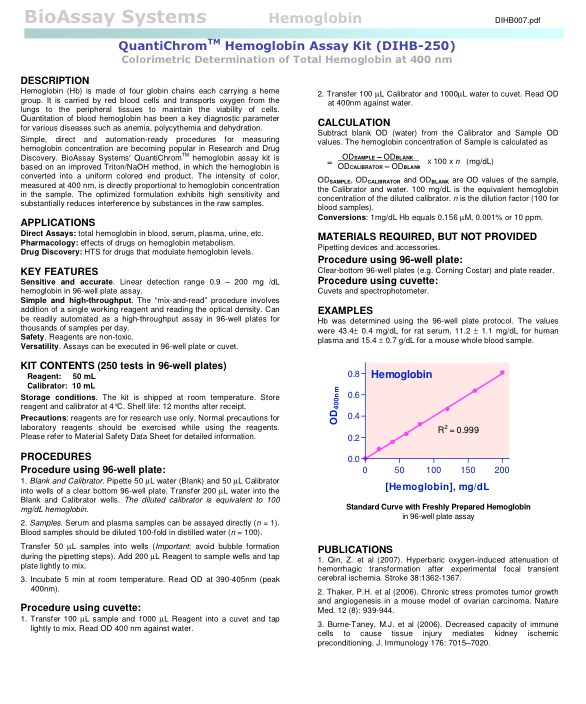 The bottle labelled "reagent" ran out first, since I only needed 200uL of the calibrator once here, as the manufacturer has helpfully demonstrated how the kit is linear up to 200mg/dL!

I read carefully in the datasheet, and it says it is "based on an improved Triton/NaOH method". That sounds interesting. I dug up a few papers on the "normal" Triton/NaOH method. Triton is a detergent commonly used in Biology and NaOH is, well, sodium hydroxide. Presumably, the Triton is to lyse the red blood cells and the NaOH is the make the pH such that the hemoglobins oxidise and form a single peak in the spectrophotometer (rather than the multiple peaks that the different forms of hemoglobin when bound to oxygen give).

I found a paper on a reagent called "AHD575" which is a Triton/NaOH mixture (it stands for "alkaline hematin + detergent") that should be measured at 575nm. I wondered if the "improvement" came from the instructions in the kit that said to measure at 400nm instead. It's possible to buy this for about €36, but we can do better by just using common lab reagents (already available almost everywhere) making this basically free. 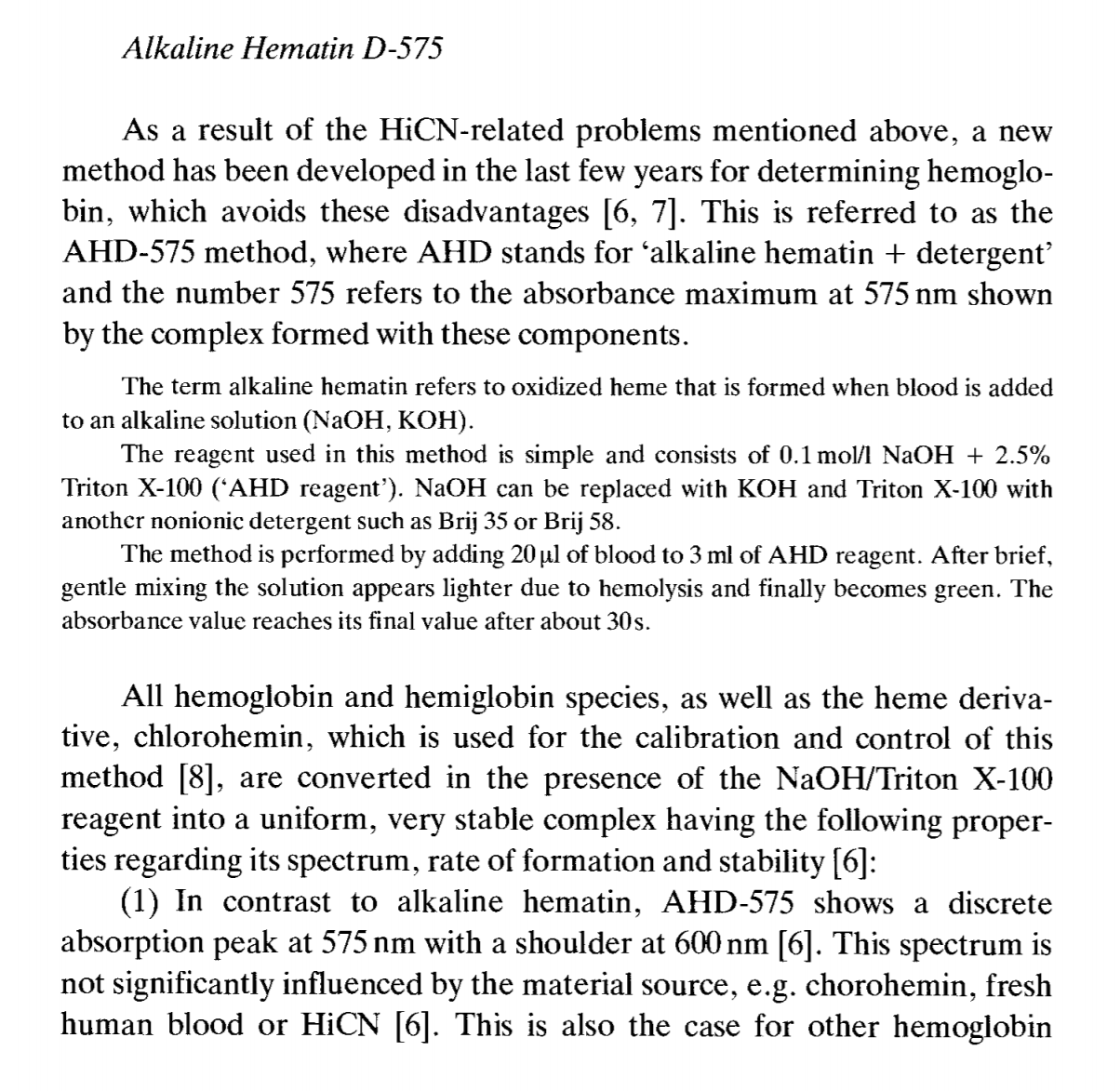 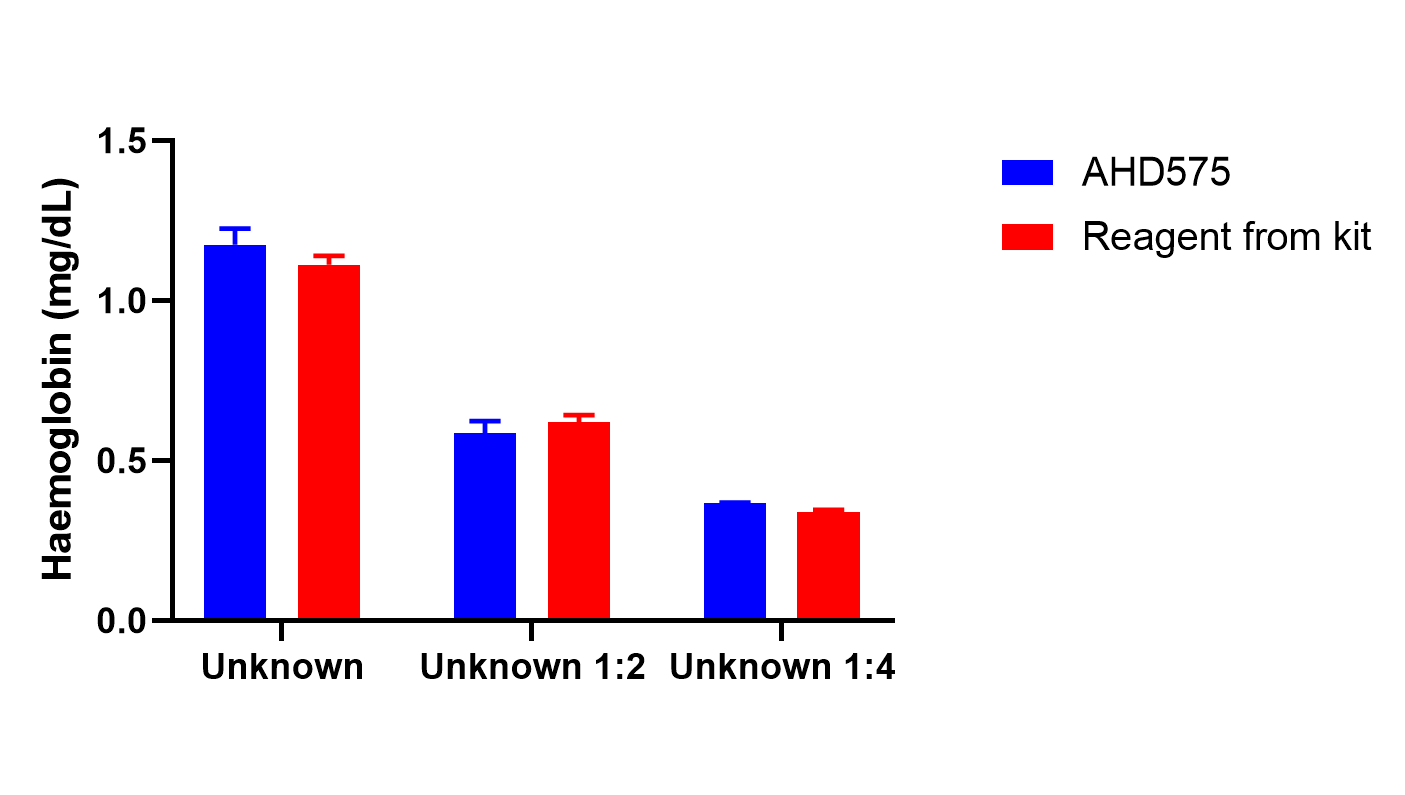 I also did a spectral scan to see if the reagent did anything different to the rest of the spectrum of the hemoglobin sample. See the results for yourself!

So, to make your own reagent for a hemoglobin quantification kit equivalent to DIHB-250/AHD575, you just need to add:

The calibrator you can actually make up pretty easily too, if you have access to a blood testing machine - just test some blood on there, then dilute it as the kit suggests for using in the assay, and voila, a reference point!

Since the absorbance varies linearly over the concentration range suggested in the kit, this should be enough to get a more standardised value of hemoglobin concentration!

What I had available to me
Aims
History of Hemoglobin measurement
The Kit I started with
Initial Research
Testing this hypothesis
Conclusions
Newer
"MB/PhD Symposium 2019" Back to list of articles
Older
"Hello, world."