Platelets are the smallest type of cells in our blood, and we have on average about 450 x 109/L of them. They are most well-known for their role in clotting, have no nucleus, but do contain mitochondria and lots of granules. 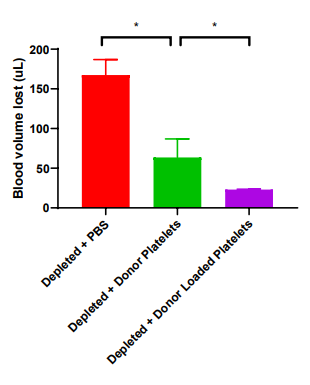 When they are activated after contact with tissue damage, platelets release their granular contents. This mechanism has the potential to be used as a targeted drug delivery system.

We used platelets made from stem cells in vitro that had their α-granules engineered, either genetically through lentiviral transduction or passively, through endocytosis, to contain Factor VIIa, a recombinant clotting factor and tested them in mouse models.

This is normally commercially available as a drug for severe bleeding that usually also demonstrates significant thrombotic side effects. We aim to investigate whether platelets can mitigate these side-effects while still showing therapeutic efficacy.